The inaugural meeting of the Leeds Youth Mountaineering Club was held on Monday, 8th October 1962 after a circular had been sent to the city’s secondary schools. The leaders were experienced climbers, most of them organisers of Youth Clubs, who realised that there was no way for teenagers in the Leeds area to learn about climbing. The first meet was at Kettlewell on 27th October. The enthusiasm generated was so great that within a short time membership numbered over a hundred. One of the clauses in the Constitution was that, to remain a member once you had reached the age of 21 (the age of majority at that time), you had to make formal application to the committee! 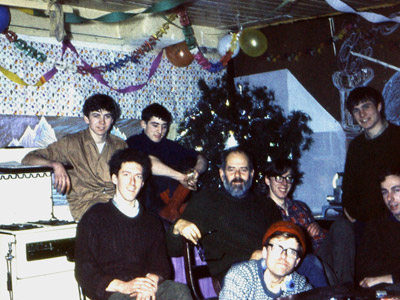 It was decided to hold the first General meeting at the Market District Boys Club on Monday 8th October 1962 and to hold the first weekend out in October after that meeting. An advert was to be placed in the 'Camping Centre' shop in the Grand Arcade, The Scout Shop on the Headrow was also to be approached.

Members would pay 2/6 (12.5p) if they were under 18 and 5/- (25p) if older. On the meet there would be a 1/- charge for members and 2/- for non-members. Charges for the transport would be separate. Unlike today no lower age limit was set. Discounts on equipment were available at Poole's and through a club bulk order at Leeds Camping Centre. There were to be membership cards and badges.

On the first meeting of the committee a newsletter was planned, there would be a list of all the officials and details of any meets planned. Those meets were Kettlewell. Langdale, Hebden, Murker, Patterdale, Stainforth, Barrow and Lastingham. They were to run once monthly from 27th-28th October 1962. Members were expected to book their own accommodation, though a minibus would be provided for those needing it.

On 11th December a more formal agenda was presented which covered the areas of concern to the committee. There were 71 fully paid up members on this date. It had made £5-18-0d profit from the Langdale meet an article was to appear in the YEP recording the Langdale event and advertising the next. A further newsletter was to go out without delay.

37 members had made the trip to Langdale and the whole weekend had been a success. On the success of the Langdale meet and at the request of those at Langdale the Hebden meet for the 5th-6th January was moved to the Lakes. There was to be a competition for the design of the Club's badge with the prize being a free trip to the Lakes on one of the meets. A Scottish summer meet was also considered and one in Wales at Easter.

It is good to report that the Patterdale meet, the second major meet for the club, in January 1962 broke even, the conditions in the Lakes that weekend were described as "interesting". As well as the mountaineering activities the committee also planned a social gathering, the first was on Saturday 19th January at the MDBC. Films or slides would be shown, and members would be encouraged to bring along some of their own to a maximum of ten. The Murker meet attracted 27 members and made a profit of £1.0.0d with groups visiting Gt Shunner Fell, Buttertubs and Keld.

Meets in the Lakes continued to show a profit with the Coniston one making £4.6.0d with 38 attending it. However, difficulties arose even then as three members including the leader were reported as being late off the hill. There were recriminations about this being done too soon and whilst there were other procedures in place. By March 1963 the membership had risen to 87.

An Insight into the Logistics

By the nature of things only a few adults had cars or access to cars and the meets were arranged to take members by coach, once a month, usually to the Lake District. Places on the 35-seater coach had to be booked in advance by filling in a form and sending it in with a Postal Order (!) There was usually strong competition for places. The coach was supposed to leave Market District Boys Club (just off Marsh Lane) at half past nine on the Saturday morning but it was usually later than that because of habitual latecomers. It would lurch into the Sunset cafe in Ingleton about lunchtime and eventually arrive in the Lakes in the early afternoon. Once the tents were up, there was just time for a route on a valley crag or a short walk. We left at three o’clock on the Sunday, more often than not, arriving back hoarse after a prolonged sing-song. One of the adult members had been at Edinburgh University and the E U Mountaineering Club Song Book was a highly-prized and much thumbed document. 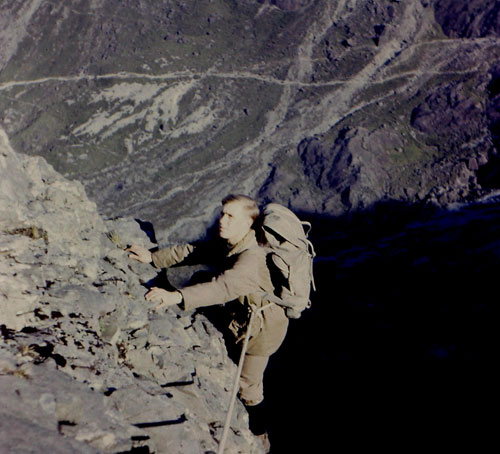 The coach provided the means of getting on meets and an enviable camaraderie in the days when most members were too young to go into pubs. It had its down side, though, particularly in respect of access. The narrow bridge at Seatoller was not negotiable by coach and, for the frequent meets at Seathwaite, we had to walk along the road carrying all our tents, food, stoves and climbing gear before camping at the foot of Sourmilk Ghyll. On Patterdale meets, we would have to walk similarly encumbered up the steep twisty road at the start of Grisedale to camp near the river where, nowadays, not even parking is allowed.

The results of the in-fighting were reductions in the numbers of members so that a coach was no longer viable anyway. Transport to meets was by cramming into whatever dilapidated vans and cars were available. I remember a particularly interesting journey to a Llanberis camping meet one Whit as pillion passenger on a Honda 50 long before the M62 was thought of!

1965 saw the terminal decline of the LYMC, at the committee meeting on 14th March, 1965, it was felt that LYMC had become unviable. It had a membership of only 30, (a third of them on the committee) and an unwieldy constitution, due in part to the internal politics mentioned earlier. An Extraordinary Annual General Meeting was arranged for Friday, 21st May at Salem Congregational Church to ratify the committee’s decision to dissolve the club. 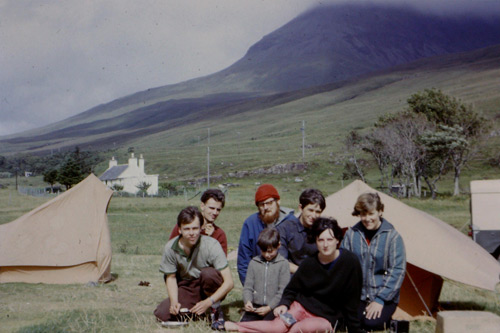 The EGM had the good sense to defeat the motion to dissolve the club. Instead, it suspended the constitution and elected a Chairman with a committee of six with a mandate to put the club’s affairs on a satisfactory footing. After a few weeks of frenetic activity, the name of the club was changed to Leeds Mountaineering Club and a new constitution emerged - this has remained remarkably unchanged to the present day - acknowledging that most of the members were adult anyway and setting the scene for development and advance.

One of the most far-sighted innovations was to organise social events on the 1st and 3rd Tuesdays of each month at the Victorian bar of the Royal Hotel, Lower Briggate. The first of these was on Tuesday 15th June 1965.

Meets were arranged for Horton-in-Ribblesdale for June 26th, Arncliffe for July 24th and North Wales for October 1st, 2nd and 3rd. Subscriptions were set at 10/-d for over 18’s and 7/6d for under 18’s.

The October 1965 Newsletter reported, amongst more interesting matters, that Paul Exley (one of the original six committee members) had been elected as Honorary Secretary. The only other members of that time who are still around are Chris Sowden and Richard Tolley.